Balthazar Bratt is a former child star who turned to a life of villainy after his show series of 'Evil Bratt' got cancelled. He appears in Illumination's eighth feature film Despicable Me 3 and is voiced by Trey Parker.

Bratt dresses in a purple jumpsuit, with shoulder pads and parachute pants. He wears fingerless gloves and white shoes. He also possesses black and thick hair that stands upon the top of his head, while the rest of his hair is long in the back (including a small bald spot from aging), giving his hairstyle an overall mullet appearance; he also has a medium-long handlebar mustache.

Balthazar Bratt is nothing more or less than a pure megalomaniac and psychopath with 100% egotism. He is a pure egotist as he thinks almost only of himself, and only on his actions. In addition to him being a megalomaniac and egotist, Bratt is an extremely ruthless and destructive individual, showing no mercy towards his enemies, especially when he attempted to destroy Hollywood and mostly, he enjoys wreaking havoc and destruction. He will extend this side to children, as he took three innocent girls hostage and placed them on a high building. This was due to being angry with their father for nearly foiling him. However, he was careful enough not to crush them with his giant robot and left without harming them.

Yet, Bratt sees no evil in his actions, which means that he is a delusional individual who had lost faith in the world. He is also extremely vengeful as all he wanted was to destroy Hollywood in revenge for the canceling his TV show. The AVL file on him describes his personality as 'narcissistic yet extremely insecure'. In addition to this goal, Bratt sought what all super-villains sought: to gain world domination after he destroyed Hollywood.

Furthermore, he suffered from megalomania; which caused him to act violently and commit evil traits.

Bratt is also a man who's trapped in the past and wished to relive his glory days, so he always lives in a bubble of himself, which is why he always listens to music from the 80s (such as the songs "Bad" by Michael Jackson or "Into the Groove" by Madonna), as well as look and act like a man in the 80s. He also had a crush on a girl named Molly Ringwald, as he was sleep-talking about her.

Bratt is also a very manipulative and cunning individual, evident in his mastery of disguise; Instances include disguising himself as an obese jewel inspector to steal the Dumont diamond, and then disguising himself as Lucy Wilde (as he tied up the real Lucy and put her in a closet) to kidnap the girls.

In addition, he is also shown to be highly intelligent, as he can construct a variety of the '80s-themed weaponry, all of which proved highly effective against both trained soldiers as well as Gru, formerly one of the world's most dangerous villains. Even without his weapons, he proved himself to be a skill fighter, as he easily overpowered Lucy and employed dancing in his fight with Gru.

During his youth, Balthazar Bratt was a popular child actor that played his own self-titled, live-action television show "Evil Bratt" in his self-titled series in 1985, which revolved around him performing various evil deeds such as robbing banks, defeating armies, destroying cities, and anything else. Although the series was beloved by kids worldwide, during the show's third season, Bratt hit puberty and experienced an unexpected growth spurt, along with pimples and facial hair, causing the series to fall from popularity and was canceled soon afterward, leading to Hollywood rejecting him. Having his reputation and career destroyed by his fall from grace, Bratt immediately turned to a life of crime, bent on destroying Hollywood.

After his turn to villainy, Balthazar Bratt quickly rose to the top of the Anti Villain League's most wanted criminal list and fought with them on various occasions, particularly with Felonius Gru, an ex-supervillain and the AVL's newest member as well as his partner/wife, Lucy Wilde. Bratt, along with his robotic sidekick Clive (who was also in the television series), robs an ocean liner transporting the world's largest diamond, the Dupont Diamond, using his rapidly-expanding bubblegum to turn the ship airborne. Bratt then gets into a fight with Gru, and, after disarming each other, begin "dance fighting", although Gru seemingly knocks him out. As Gru prepares to turn the diamond back to the authorities, Bratt gets back up, stating that he was only pretending to be knocked out, and blows Gru away using a sonic keytar, publicly humiliating him in the process. Before Bratt can get away, numerous AVL agents swarm the liner, forcing him to escape. As punishment for failing to capture Bratt, both Gru and Lucy are fired from the AVL by the new and overly harsh director Valerie Da Vinci.

After escaping Gru, Bratt poses as an overweight jewel inspector to gain access to and retrieve the Dupont Diamond from a museum in Paris. The next day, Bratt's diamond heist makes the first page of the news, infuriating Gru. Later, Bratt trains for "the big day" and watches an episode of his television series in which Evil Bratt attacks a city (could be New York because the Statue of Liberty was seen in the episode) with a giant robot and uses his expanding bubblegum to cover the city in bubblegum and use his diamond-powered splash-damage laser to float the city into space, with Bratt planning on doing the same thing to Hollywood as revenge for them canceling Evil Bratt.

To get his old job back, Gru plots to steal the Dupont Diamond back from Bratt with the help of his twin brother Dru Gru (who believes them to be stealing it as an act of villainy, not heroism). After making it to Bratt's bedroom, they narrowly avoid waking him up and alerting him before he wakes up himself and continues working on his giant robot. After Dru accidentally alerts Bratt to their presence by nearly choking on his expanding bubblegum, Bratt confronts the brothers, surprised there are now two of Gru. However, he delights at the thought of destroying Gru twice but Gru throws the gum at Bratt, sticking him to the wall while they quickly take the diamond and narrowly escape his fortress thanks to Lucy who had followed them and they return to the mansion with the diamond.

Once at the mansion, however, Gru and Dru get into an argument over how the former wants to return to the AVL, while the latter wants to continue their family's villainy tradition, ending with both disowning each other and Gru storming out.

Meanwhile, Bratt disguises himself as Lucy (tying up and gagging the real Lucy, and stuffing her in the closet), takes the diamond back and kidnaps Margo, Edith, and Agnes (along with Agnes' new pet one-horned goat Lucky). Gru is about to leave out the door when he finds Lucy in the closet and she frantically tells him that Bratt took the girls. Gru spots the plane flying away and rushes to Dru who is still sulking from their argument. But learning that his nieces have been kidnapped by Bratt, Dru immediately drops his anger at his brother and he, Gru and Lucy board his hovercraft and fly to Hollywood to stop Bratt and rescue the girls. On the way there, they nearly collide with the aircraft that the Minions built (to escape from prison), and the Minions decide to follow them.

At Hollywood, Bratt's giant robot self-replica emerges from the ocean and begins attacking the city, shooting his expanding gum all over the city as several people run in terror. Edith demands Bratt to release her and her sisters, and Bratt complies by casually placing the girls (and the goat) on the ledge of a building to give them a perfect view of the destruction he is causing. After shooting enough of the gum, Bratt uses the robot's diamond-powered splash-damage laser cannon to begin separating Hollywood from the ground to let it drift off.

Gru, Dru, and Lucy arrive at Hollywood to see Bratt's robot attacking the city and Dru realize Bratt's plan due to having watched Evil Bratt. The Minions parachute out of their aircraft and onto the expanding gum and desperately try to pop it (by using chainsaws, gardening forks, lightning rods on umbrellas and even TNT), but it is too strong and sturdy. While Lucy rescues the girls, Gru and Dru shoot Bratt's robot with several missiles. Unfortunately, they prove to be ineffective and Bratt has his Bratt-pack (modified Evil Bratt dolls) bring down Gru and Dru's plane, and the two brothers leap out of the aircraft before it crashes and then explodes. Dru uses the suction on his spy suit to land on the robot's chest plate (without Bratt noticing), while Gru lands hard on the ground, knocking him unconscious. Seeing the unconscious Gru, Bratt begins firing his laser towards him, but before the beam can reach Gru, Dru destroys the robot's generator, causing it to collapse.

Whilst trying to search the wreckage for his brother, Gru comes face to face, being accused by an enraged Bratt, and before he can use his keytar to blow him away, Gru proposes a dance fight and Bratt complies setting the music to Madonna's Into the Groove. After a brief dance fight, Gru snatches Bratt's keytar without him noticing and uses it to both blow him away and similarly humiliate him to how Bratt had previously done to him, leaving Bratt floating away in his gum while naked, and he was cornered by AVL helicopters. Gru desperately searches through the robot's wreckage for his brother, only for Dru to pop out from behind him and hug him from behind his back, to Gru's extreme joy. Gru, Dru, Lucy, Margo, Edith, Agnes, and the Minions all celebrate their victory in finally stopping Bratt once and for all.

I've been a bad boy! hahahaha 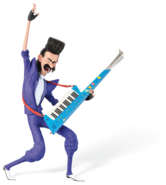 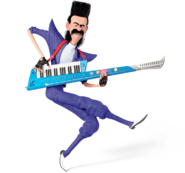 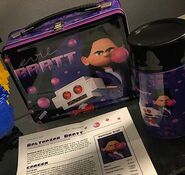