Despicable Me Wiki
Register
Don't have an account?
Sign In
Advertisement
in: Minions, Protagonists, Minions Paradise Characters,
and 7 more

One green, and one brown

Bob (temporarily known as King Bob) is one of the Minions. He first appears in Despicable Me 2 and the prequel films Minions and Minions: The Rise of Gru, being the deuteragonist of these two.

A minion by the same name, having a different appearance, appears in Despicable Me.

Bob is a short and bald Minion with heterocromia. He often carries around a teddy bear that he owns called Tim, which is brown with yellow buttoned eyes.

Bob is a Minion who is more childish and immature than most of the other Minions. He is described as a "Little Brother" who finds love in anything and everything, including a rat (who he named Poochy) he found in a sewer in the Minions film. He also enjoys bedtime stories and playing with his favorite stuffed teddy bear, Tim. However, in the audition scene in Despicable Me 2 (having grown since the time of Minions), he became more plumper which made him look more like the short and plump Minions with spiky hair, just no hair. Is also shown more mature, albeit still playful, as well as more of a goofball like all the other Minions.

Bob is first shown during the credits of Despicable Me 2, where is auditioning for the spin-off film Minions along with Kevin and Stuart. He is playful and brings much annoyance to Kevin. He also tries to attack a butterfly. Since then he hasnt done that.

His appearance is much different. He looks similar to Jerry. His Green eye is slightly Lighter.

Bob was the only Minion interested in Kevin's journey, after begging him he is able to join. On the way to their destination, Kevin carried him sometimes. Bob grew hungry halfway through the journey and tries to eat Kevin with Stuart, who has a hallucination that the minions are speaking bananas.

When arriving to New York, Bob is quite interested in a parade against the war so he holds a sign with "BOO YA!" on it. Later, the trio visit an album store, and Bob follows a female customer because her clothes have lots of bananas drawn on it. Soon, Bob is accidentally brought in to the taxi with the woman's baggage by the taxi driver; she soon, notices Bob and shrieks then throws him and his teddy bear out. Then, he enters a department store while Kevin and Stuart search for him after noticing him missing. Kevin grabs the loudspeaker of the store and calls Bob, while Bob enters a changing room, thinking Kevin is inside. In the room, he sees lots of mirrors on the wall; seeing his reflection, he thinks it is his buddies, he runs bumping into it and discovers it's not real. Kevin goes into the room, and Bob tells Kevin he misses the tribe. Kevin hands him his teddy bear just before the light goes out.

He is quite excited when he sees some information from VNC, a top secret channel about villains. In Villain-Con, Bob meets Professor Flux, who invented a time machine, but the professor is killed by one of his future avatars. In Scarlet Overkill's speech, Bob accidentally wins Scarlet's challenge, getting her ruby - he tries to retrieve his teddy bear and accidentally swallows the ruby when numerous villains try to get it chaotically.

In London, he is given a Stretch Suit by Herb Overkill to steal Queen Elizabeth II's crown. He later wields Arthur Pendragon's sword in the stone (with the help of the stretch suit), Elizabeth gets abdicated and Bob is crowned as the new King of England. (his speech in Buckingham Palace can be seen in here). Although, later, Scarlet and Herb arrives in Buckingham Palace, and Bob abdicates in favor of her. Nevertheless, she sends him with Kevin and Stuart to be tortured. After escaping the torture room, the trio makes it to Scarlet's coronation at Westminster Abbey, where Stuart and Bob accidentally drop a chandelier on her. After hiding himself from the chase from other various villains, Bob gets fooled and captured by Frankie Fishlips.

The next day, Bob and Stuart are tied up to a pile of explosives, ready to be set off by the Overkills, but Kevin breaks in and saves them. Meanwhile, after thinking Kevin had "died" with Scarlet's missile in the later fight, Bob was the first one to mourn his "death". But it turns out that Kevin is alive and he returns to normal size and he returns to him as a teddy bear.

At the end of the movie, Queen Elizabeth II thanks Bob for being king and rewards him with a tiny crown for his teddy bear Tim and he hugs her in return, he later gives the crown to Scarlet in pity, and says goodbye to her, as he joins alongside the Minion tribe chasing Felonius Gru.

Bob is a playable character in Minions Paradise. He can be unlocked and gain new story when the player has finished enough number of party supplies, and still, Phil need to help Bob, including building bridges to a new island.

After being helped, Bob still stays in certain areas that hasn't cleaned up yet, and when player is able to access every available places to expand on the island, Bob then still be on the island but becomes an unplayable character.

Bob is a playable character as King Bob. He appears after a lot of bananas in the game and players around the world as a free gift for everyone. He will wear a Royal costume as it was in the film Minions. Just the back of the royal costume has a lot of bananas drawn. This was not at all in the. And the token was also not in the Film. Because he hasn't worked for Gru in the cartoon yet. He worked for Scarlett Overkill in the Film Minions.

He also knows how to ring a bell (like in the Film Minions) and launch a lot of bananas from the rope when he gets hungry.

In 2022, McDonald's released a new set of Happy Meal books and toys. The set included 2 books and 12 toys. One of those books was titled Minions: Love Live King Bob. One of the toys is Bob dressed in a pink pyjama dress with flowers on it. He is also wearing a pageboy styled wig. He is also holding a teddy bear. When the teddy bear is pressed Bob's wig pops off his head. On the bottom of the toy, there is a wheel enabling the toy to move.

Check out this page's gallery!

"Nasi goreng, kecap manis" - is an Indonesian word when he was talking to Young Gru when he scared and he sleeps with Gru. 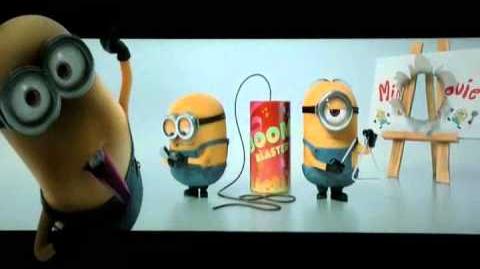