Always (in Russia only)

The Bogatyr Minion Costume is a playable character in Minion Rush. It costs 50 costume cards and 1 coin to unlock or can be bought in occasional bundle offers in the Shop. It appears to carry a heavy Morning Star weapon, which is hard to carry.

Bogatyr as appeared after the 5YC update 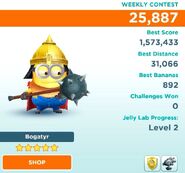