Despicable Me 2
"Panic in the Mailroom"

Evil Minions are characters that appeared in Despicable Me 2. Originally Gru's Minions, these purple creatures are the product of the extreme mutation caused by the PX-41 serum entering their body.

When the Minions were mutated by the PX-41, they were transformed into vicious, mindless, destructive monsters that are completely indestructible, and will eat anything in their path.

The Evil Minions are very different from regular Minions, having purple skin, long arms, wild bushy purple hair, and crooked teeth. They are also wild, and don't usually speak, as much as they scream most of the time.

Soon after stealing the Arctic PX-41 lab, El Macho and Dr. Nefario began to kidnap the Minions. Sometime later, the first Evil Minions were created when Kevin and Tom were injected with the PX-41. The rest of the Minions soon became the Evil Minions and were stuffed into rockets that would land in New York, Paris, Tokyo, and one other city.

Fortunately, Dr. Nefario created an antidote (PX-47)  and mixed it in with the awful-tasting jelly Gru was developing, and utilizing a rapid fire delivery system, returning all the transformed Minions to normal. A single Evil Minion still somehow escaped and appeared at Gru and Lucy's wedding.

The Purple Minions, are, for all intents and purposes, indestructible, as Kevin (as a evil minion) was hit with a flame thrower and a gun, and was unharmed, struck with an ax and a police car, with no damage, (even eating the ax and car), and even swallowing a bomb and containing the explosion with no problem at all.

Kevin as an evil minion. 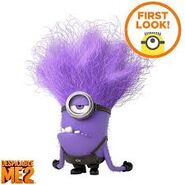 Purple Minion at the end 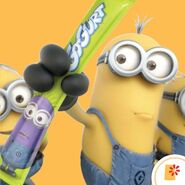 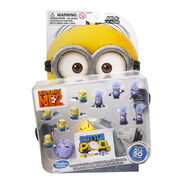 In the right hand side, there is a purple minion with a magnet 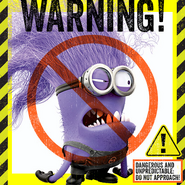 Retrieved from "https://despicableme.fandom.com/wiki/Evil_Minions?oldid=21212"
Community content is available under CC-BY-SA unless otherwise noted.