Floyd Eaglesan is a minor character in Despicable Me 2. He is the owner of the wig store, Eagle Hair Club, in the Paradise Mall.

Floyd has brown eyes, blonde hair, a long mustache, and a beard. He wears a green cheongsam.

Floyd has an obsession to hair just as much as Agnes has an addiction to unicorns. He had apparently opened up his own hair salon and his love for hair is seen when he kisses a gleaming white wig and as he puts it back on its stand he says "There you go, my sweetie.".

Floyd is also honest and innocent, and pleads that he was framed when he is arrested.

He is one of the suspects that Gru and Lucy investigated. Gru tried to see what's on the other side of the wall, but Floyd stopped him. He is later caught by the AVL, but he protested that he is framed.

It's unknown what happened after his arrest, as he is not seen after.

Floyd and his pet eagle. 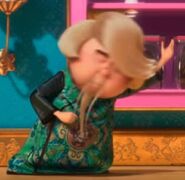