Grammy Norma is Ted's grandmother who tells him about the Once-ler. She is voiced by Betty White.

Grammy Norma's hairstyle is a big, round, curly white afro like her daughter, Mrs Wiggins. She wears small, round glasses and a magenta cardigan with pale pink frills over a bright green dress. She also owns a wooden spiral cane.

It is known that she remembers when Truffula trees still existed. At some point in time she gave birth to her daughter who would later give birth to her grandson. Not much else is known about her early life.

Grammy Norma seems very wise and knows how to get out of a tough situation. She is also eccentric and reasonably fit, as she can snowboard. 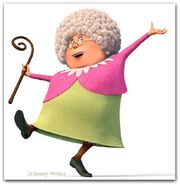 Retrieved from "https://despicableme.fandom.com/wiki/Grammy_Norma?oldid=71867"
Community content is available under CC-BY-SA unless otherwise noted.