Felonius Gru owns an airship as his means of air transportation and combat.

Gru's airship is a heavily armed aircraft used by Gru to transport him over large distances his car can't get to. Despite its unorthodox design, the airship is surprisingly powerful and functions normally under most circumstances. The airship itself is tall and quite thin. At the front it tapers to a point and a smaller one at the back. A huge rotating rocket thruster is hung over the back point as the main source of power, which allows the ship to achieve VTOL.

There are two seats in the front and in the back, there is a claw that can drop through a hatch in the bottom. It also seems to have a large cargo hold and can accommodate many minions.

The vehicle is armed with six machine guns (three in each wing) and has two large missile racks concealed in its body.

Gru initially uses his airship to steal the SR-6 from a East Asian research lab, only to have Vector steal the shrink ray from the former. Gru attempts to shoot down Vector with his rockets, but Vector deploys countermeasures before shrinking his ship. Gru is forced to ride his shrunken airship all the way back to home with his two Minions.

After a considerable amount of time, the airship grew back to its original size and is noticed by Dr. Nefario, who used it to rescue Gru from falling to death from Vector's escape pod. The duo then used the airship's grappling hook to force open the escape pod's hatch and rescue Margo, Edith, and Agnes. However, when Gru was climbing to Margo on the metal hoist, it breaks, and the Minions form a chain to save them and bring them back to the aircraft.

After returning to Gru's lair with the PX-41 Antidote, Dr. Nefario mounted jelly mini guns on the airship and stocked handheld jelly guns inside the vehicle's side bay, while removing its rocket pods. Nefario subsequently rescued Gru with it at El Macho's lair. He, Margo, Edith, Agnes, and a few other Minions then landed the ship in the courtyard to take down the rest of the Evil Minions.

After Lucy settles the girls and Gru calls the Minions and Dru to sleep, they steal the airship and replaced Gru's emblem with a "D", as Dru and the Minions "continue the family tradition".

A massive array of rockets 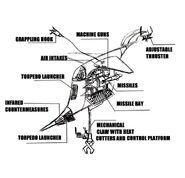 Sketch of the airship's structure