The Gru Family is family with long line of villainy with tons of notorious supervillain throughout the century. All the supervillain members have a same facial structure like Gru and Dru. The existence of the Gru family is shown under the basement of Robert Gru's mansion through the statues of Gru and Dru's ancestors who are supervillain that terrorized the world in the past centuries ranging from mad scientist, pirates, bandits and witches.

As much as known to Felonius Gru, the Gru family consists of 32 members, starting from Charlotte and Léopold Gru.

Although very little is known about any members of the family, it is known that Marcel Gru was a werewolf, as shown in Gru Family Tree in Gru's House, and Ronald Gru was a pirate. It is also known that Felonius Gru is one of the direct descendants of Charlotte and Léopold Gru, and he is in the 6th generation. 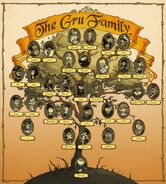 A temporary version added by the girls
Community content is available under CC-BY-SA unless otherwise noted.
Advertisement