Despicable Me Wiki
Register
Don't have an account?
Sign In
Advertisement
in: Non-canon, Bosses in Minion Rush, Minion Rush Characters

Meena the Cookie Scout (also known as Meena) is an antagonist and one of the bosses in Despicable Me: Minion Rush. She is the boss of the Residential Area, and she is included in the game since the debut of Minion Rush in June 10, 2013, along with Vector. It is inspired by a scene in Despicable Me, where Vector made cookies transform into robots.

She is a young girl who wears a pink children cap, green scarf, a white short sleeve with some badges and pink shorts. She drives with her white kart, which consists of a rocket-like object at the back and three wheels; she also takes a cookie-bot launcher and chases the minion in her kart.

The minion is faced with Meena after a whiteout; before this, the tracks are suddenly cleared and there's no obstacles or Bananas. The minion is slightly hit by Meena's kart and the battle begins. Meena tries to shoot the Cookie-bots she stole and drives faster if her attack is avoided by minions, but the Minion can simply dodge these attacks swiftly or throw some small cookie-bots (those with a cross on them) to defeat Meena.

When Meena is defeated, her kart suddenly explodes and the minion cheers before being the minion is warped to Residential Area's road again. Sometimes, before the Meena battle begins, instead of obstacles clearing, there will be a turn or she will appear once the secret area is exited.

"I'm telling my mom!"- After she is defeated.

"That's how the cookie crumbles!", "You just bought it!" - After she defeats your minion.

"In your face!"- When she launches cookie-bots at your minion. 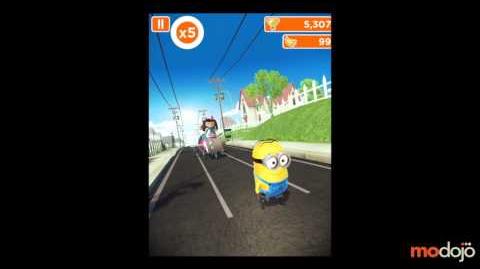