Despicable Me Wiki
Register
Don't have an account?
Sign In
Advertisement
in: Incomplete, Minions, Minion Rush Characters,
and 4 more

Pierre Coffin
Mel is one of the Minions and one of the main characters of Despicable Me 3.

He is an one-eyed short minion with combed, half-bald and thick hair.

Mel is the leader of the Minions in the film's storyline and the protagonist of the minions' subplot. Gru has retired from being a villain for years. Minions, however, want Gru doing to become a villain again as he has lost his job being an agent for the Anti-Villain League but Gru declines. So a rebellion against Gru, led by Mel, is formed, they decide to leave Gru for another possible villain; except Dave and Jerry, who just enter the lab after the performance for Gru's family.

After the Minions quit Gru, they walk out and it is raining a lot. They run into Dru's butler, Fritz, in the process who asks for the whereabouts of Mr. Gru's address. Mel and the minions, still angry at Gru, act hostily towards Fritz and refuse to tell him as to where Gru lives.

The next morning, Mel and the Minions get tired of walking for the whole night, and are still angry at Gru, so they chase after a pizza delivery guy to steal his food. However, they trespass into a TV studio lot, which causes the police to chase after them. They decide to hide, but end up on the set for a singing competition in the process. Then, they start singing a Minionese rendition of the famous patter song, "Modern Major General" from the Gilbert and Sullivan opera, Pirates of Penzance, which they dub 'Papa Mama Loca Pita'. The song is a hit with the judges and audience, but the Minions get arrested soon after.

The Minions learn to rule out the prison. But soon, Mel (Number 001) realizes how much he misses and needs Gru, so the Minions create a plan so they can escape from the prison. They escape successfully when it was dark, but a Minion is left behind as he needs to wave light signals for the aircraft. Mel, who pilots the plane, sees Gru, Lucy and Dru, so the Minions follow them to the Hollywood and try to destroy Bratt's bubble-gum with their weapons. Eventually, Bratt is defeated, though mostly without their help, so they go back with Gru's family along with Dru.

After Lucy settles the girls and Gru calls the Minions and Dru to sleep, Mel, along with other Minions removes their dungarees and Dru drives Gru's Airship, which Gru's emblem is replaced by a "D", to "continue the family tradition". He later returns as a brainwashed minion with Vector but he redeems along with Vector and the other minions and work with Gru instead.

Mel makes a cameo appearance in the Illumination Entertainment variant for Sing, Despicable Me 3, and Sing 2.

Mel is the fourth runner in Despicable Me: Minion Rush, and he was first introduced in the update v4.8.0 on August 9, 2017. Unlike the other three minions, his ability did not originally appear until he was unlocked by 60 Mel Cards. It was the last stand-alone minion to be added in the list before the 5-Years Celebration update (version 6.1.0).

Since game version 6.1.0, Mel has a different purpose in the game. He is no longer a stand-alone character to switch to from Dave, but a Wardrobe character blended in with the rest of the costumes and hats. In the older version, Mel, as well as Carl and Jerry had a separate section in the Costumes part of the Shop, but in the latest version all four characters and their costumes / hats are grouped in one place, the Wardrobe. Mel, as well as the other costumes / characters, have new abilities.

It costs 50 costume cards and 10 coins to unlock or can be bought in occasional bundle offers in the Shop. 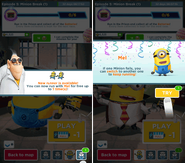 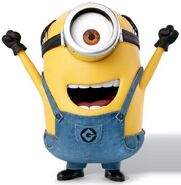 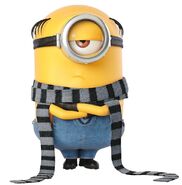 For more photos of Mel, check out this page's gallery!