The Minion Beach is an artificial beach located in El Macho's Lair. It is a place El Macho and Dr. Nefario used to keep the kidnapped Minions before turning them into Evil Minions.

Though not completely shown, it can be implied that the beach was a part of the stolen PX-Labs, which was stolen by El Macho by his Magnet Ship and then put into his underground base under his mansion. In addition, the researcher can monitor the whole beach through a window in the controlling room. The landscape, such as the sky and sea around the beach, is seemingly boundless to the Minions and they are pleasant being at there. Presumabaly, an artificial illuminant acts as the Sun. Dr. Nefario can control the beach and take minions from the beach easily, such as drawing Kevin, who is lying on a swimming tube away from the beach, down to the testing seats of El Macho's Lair.

The beach appears to be a small island, and the middle area is the higher place. There are at least three banana bars, a giant water slide, a beach volleyball court, and dozens of beach chairs and other facilities for sunbathing minions. Minions also use swimming tubes or drive paddle boasts for recreation.

Sometime later the abduction of several minions, the Minions are placed into the Minion Beach. One of the Minions, whose tongue is stuck with a popsicle, later wakes up and finds out that he along with lots of Minions are at a tropical beach. Kevin, who is now dressed with a hula skirts, gives him a banana, starts dancing and rushes toward to the beach. At that moment, the popsicle falls down and the Minion also jumps into the sea after he rips off his overalls.

Later, Kevin floats on the sea away from the beach with a swimming tube and eats banana, Dr. Nefario makes a whirlpool and makes him swoops to El Macho's Lair underneath.

After the update in September 2013, the Minion Beach appeared as a playable location in the mobile game Minion Rush.

The game itself takes place in a deserted tropical island, some equipments resembles that in Minion Beach (such as the Water Silde and the Bar), though there are more elements taken from the film Minions. 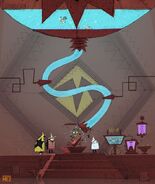 Early concept art about the beach to El Macho's Lair