Despicable Me Wiki
Register
Don't have an account?
Sign In
Advertisement
in: Minions, Protagonists, Featured Articles,
and 7 more

This article is about the characters. For the 2015 film, see Minions (film).

The Minions are small, yellow, cylindrical creatures, who have one or two eyes. They are the signature characters of the Despicable Me series. They bring much of the comedy in the film, and they are known as the scene-stealer of the movie. Frequently, they speak in an incomprehensible language, called Minionese, occasionally switching to English. They are much childish in some ways, yet they seem to be very intelligent in certain aspects. All the minions are minor characters in Minions (with the exception of Kevin, Stuart, and Bob), major character in Despicable Me and Despicable Me 2 and supporting characters in Despicable Me 3 (with the exception of Mel).

They are impulsive creatures with little self-control, but with a wide-eyed wonder and odd innocence that endears them to viewers and makes them relatable. They can be pesky when they are doing weird interactions with other people, animals, or objects; they are also famous for their gibberish-speaking language. Minions have standard English names (see below).

Unlike most other criminal masterminds and their usual doctrine of abusing their henchmen, Gru gets along famously with the minions. He genuinely seems to like them and shows appreciation for their hard work and support, only having to be strict with them very few times. He even seems to know each of them by name.

As a rambunctious bunch of simple-minded homunculi, Minions are a similar size and shape but have unique features to tell them apart, such as height, number of eyes, roundness or secondary features such as hair, eye/pupil size or clothing.

Minions possess few additional physiological characteristics; with a crack and a shake, they can double as glow sticks for activities in the dark, such as going through ventilation ducts. They additionally can survive without air, as one is seen in outer space without oxygen in Despicable Me.

Though there are several hundred minions, there are only about forty-eight possible combinations of height and build (short and chubby, medium, tall and thin), hair (tall buzz-cut, short buzz-cut, sprout, combed, spread out, bald), and eyes (one, two). One-eyed minions are always almost all small, although a tall one-eyed minion appears in promotional artwork. Tall Minions are all with Sprout-Cut Hair. 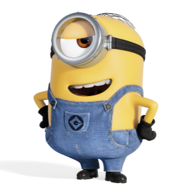 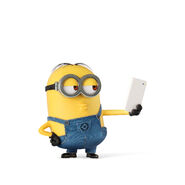 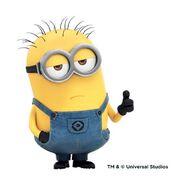 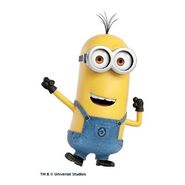 One eyed, short and plump minion (Despicable me concept art only) 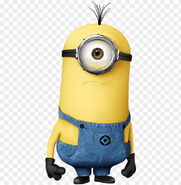 One eyed, tall minion with sprout hair (Despicable me Promotional Artwork Only)

They are fiercely loyal to Gru and Dr. Nefario and extremely eager to please, willingly helping with any evil plans, but at the same time they are friendly and fun-loving. Despite being relatively simple-minded, they are capable of building weapons, operating those weapons, using computers, and even driving.

They express themselves mostly through actions, not words: their "language", Minionese, is fairly basic, they speak in strange jabber combined with various human languages. Hence, their language is incomprehensible to most humans, though they do understand English. It is also possible to isolate elements of Japanese and Spanish from their speech patterns.

Minions love bananas and apples (or "bapples", as they call them), and the mere sight of one of these fruits can result in complete chaos. They also enjoy fine arts and find anything having to do with buttocks extremely funny. There are few things these little guys do not find funny. They love trying new things and presumably, they also love potatoes (they mention potatoes on occassion.) They dislike being unsure of themselves, and when Gru leaves questions unanswered. Their sense of humor is somewhat childish, if not silly, laughing from the sound of bubbles in a water filter, scanning their own butt in a copy machine, and when mentioned words such as "bottom" or "butt".

Minions also enjoy playing, especially with Agnes, Edith, and Margo, as seen in the toilet paper fight scene. There is a minion cameo in Sing in a drawer.

For the category of all the identified minions in the film, see here. The italic names below are those minions who have distinctive appearances in different films.

Panic in the Mailroom

"Poppadom?" — Stuart when disguising as a girl.

"Papoy?" — When Minions are talking about toy.

"Ka ga" — A Minion when excited to join a beach party.