The Minions appeared at the 88th Academy Awards as the presenters for the winner of Best Animated Short Film in 2016.

At the ceremony, the Best Animated Short Film award is given to Bear Story, and the news was announced by Kevin, Stuart, and Bob.

The three minions go on to the stage and thanks the audience. Kevin is with a speech manuscript and is about to speak, but the stage suddenly opens and a microphone emerges from the pit.

Bob wants to announce the news, but Kevin stops him. Kevin begins to speak in Minionese, but the microphone starts to descend and interrupt Kevin, and later Kevin has to move his head into the pit to speak. Suddenly the microphone rise again and it accidentally goes into Kevin's mouth. It continues to rise, and Kevin wants to catch it but he hangs up with it instead.

It turns out that the microphone is controlled by Stuart. It begins to hit Kevin and makes him dizzy, but it suddenly pops up and Kevin flies into the air and Stuart attempts to reach him but Kevin falls to the ground heavily. The blow makes Kevin passes out.

Bob continues the ceremony. Then a brief introduction about the nominees, Bear Story, Prologue, Sanjay's Super Team, We Can't Live Without Cosmos, World of Tomorrow, is shown in the video. After the introduction, Bob announces happily that Bear Story wins the award and Kevin is still unconscious.

The scene changes to the audience. The host talks some information about Gabriel Osorio and Pato Escala, and they go toward to the stage. In the end of the video, Kevin wakes up but still groans with pain and he is carried away by Bob and Stuart.

Kevin: Bank-yu! (Bob and Stuart also appear and Bob is with his favorite rat, Poochy)

(Kevin starts to speak, but the ground opens and a microphone appears)

(The microphone starts to descend)

(The microphone suddenly rises and is stuck in Kevin's mouth)

(The microphone starts to hit Kevin again and again)

Stuart: Hobana! (Kevin suddenly gets hit by the microphone and he flies into the air and screams; Stuart runs around the stage) Pikajiday, pikajiday! ...Manao! (Kevin falls to the stage)

Bob: Ha, ooh-hoo-hoo! (Puts down Poochi and steps on Kevin) Pulle shilda hamban shiang pelana punah... (And the nominees are...)

(The scene is switched to real world; Gabriel Osorio and Pato Escala leave the seat from the box)

Kevin: (Back to the video) Eh hey, bravo! Uh, ouch, oh. (Carried away by Bob and Stuart) 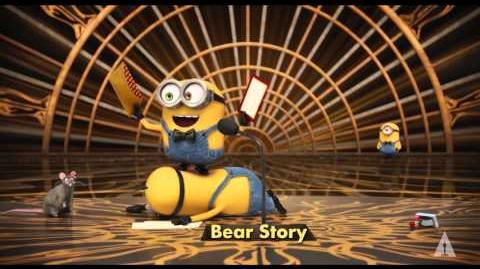 Retrieved from "https://despicableme.fandom.com/wiki/Minions_Oscars_Segment_2016?oldid=52784"
Community content is available under CC-BY-SA unless otherwise noted.