Despicable Me Wiki
Register
Don't have an account?
Sign In
Advertisement
in: Real World, Cast and Crew

Role in
Despicable Me

Miranda Taylor Cosgrove (born May 14, 1993) is an American actress and singer-songwriter. Cosgrove is best known for her role as Carly Shay on the Nickelodeon teen sitcom iCarly. Cosgrove voiced Margo Gru on Despicable Me, Despicable Me 2 and Despicable Me 3.

Cosgrove was born in Los Angeles, California. At the age of three, she was discovered by a talent agent while singing and dancing at the Los Angeles restaurant, Taste of L.A. Her career began at the age of three when she appeared in television commercials. 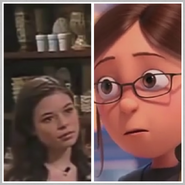