The Secret Life of Pets

July 8th, 2016
Mower Minions is a 2016 short featuring the Minions. The short made its theatrical debut on July 8th, 2016 with Illumination Entertainment's film The Secret Life of Pets. It is also counted as one of the three mini-movies of the film as of December 6th, 2016.

One year after the events of Despicable Me 2, the Minions see a blender which costs $19.95 from a commercial on television, and they want to buy one to blend bananas. They find a piggy bank and decide to break it by explosives at first, but they break it by simply knocking it instead. Yet, only a few pennies are left. Then they see that there's a Larry's Gardening Service truck doing mowing business in the neighborhood, so the Minions decide to start a lawn mowing business themselves.[1] The minions steal from the truck sneakily and go to a retirement home called Fuzzy Memories and ask the elderly if they need to have their lawn mowed. The old people can hardly understand what the Minions say, but an old lady tells the Minions they can go ahead.

However, the Minions' work turns out to be chaotic; four of them were in terrible states after the chaos, such as Stuart becoming blackened and naked after an explosion from a grill with a gas tank, Kevin having his head stuck in a fallen beehive, Jerry turned green by being grossed out after having nausea from accidentally using a bag with corgi poop for easing the hyperventilation, and one wound up being inflated and floating around after his hazmat suit was inflated by a flying leaf blower. And one of the Queen's Corgis runs after him and plays like an inflatable ball. Nevertheless, their clumsy acts amuse the elderly and at last the Minions are given a bottle of 2,000 pennies and one of the old ladies says that they can visit them anytime.

The Minions are later seen when they can hardly move after they ate too many banana smoothies made by the blender they bought. At the same time, an advertisement promotes that a new blender is available and it costs $142.95, and the Minions want to get it so they go for it again. In a post-credits scene, one of the Minions puts back all the pieces of a broken gnome (which was destroyed during the chaos previously) and hugs it, but it breaks instantly. 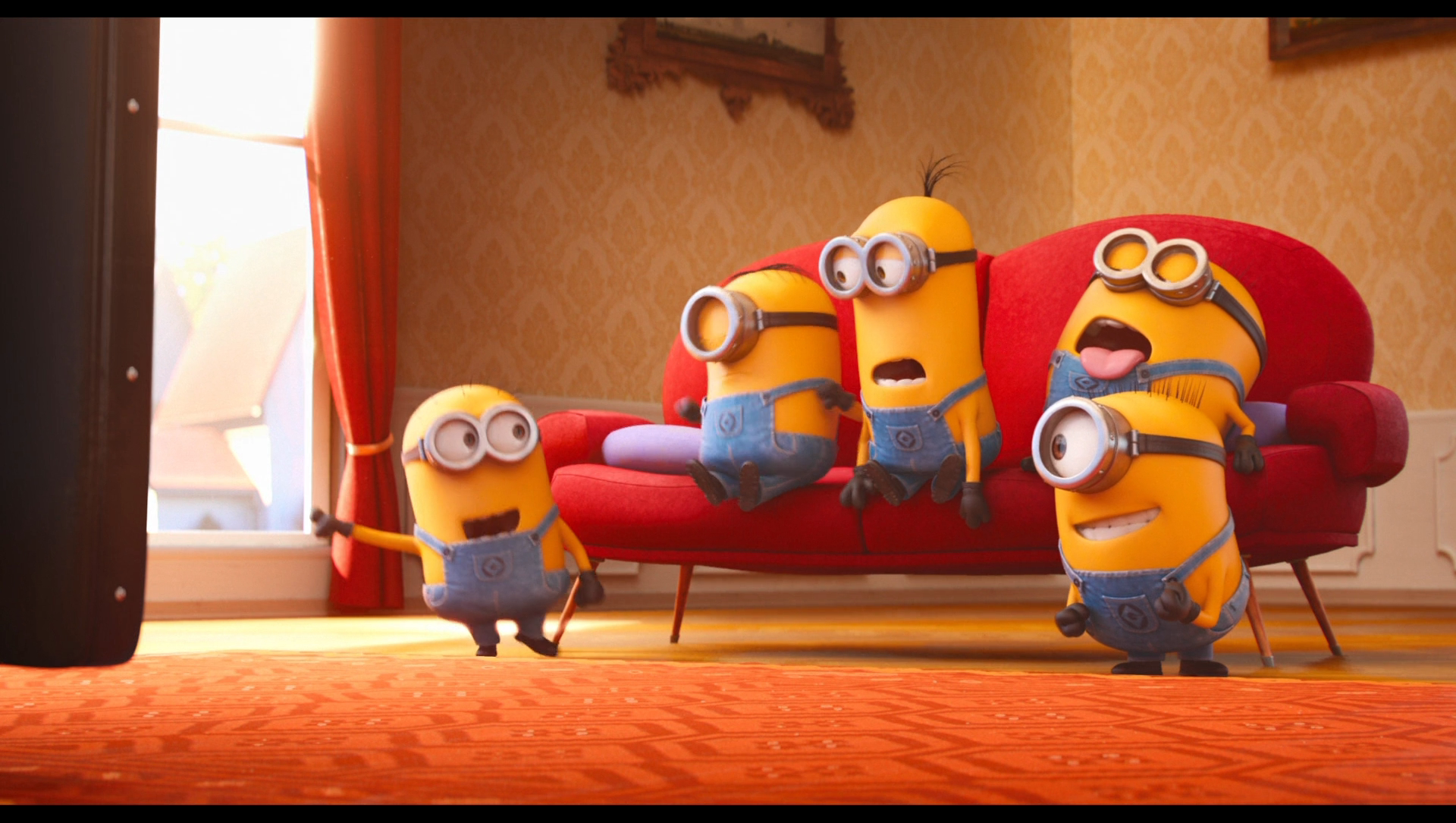 1. One Minion crashes a riding mower into a tree, knocking a garden gnome onto a water sprinkler, eventually causing its head to explode from the water pressure.

2. A one-eyed Minion causes a gas-powered barbecue grill to explode, rendering him blackened and naked.

3. The riding mower Minion steps in corgi poop, and spends most of the cartoon chasing his mower, which is out-of-control and driving all over the yard.

4. A Minion with a leaf blower ends up flying and hits a tree, causing a beehive to fall on another Minion

5. After the garden gnome's head explodes, a Minion who had had a staring contest with it hyperventilates using a bag that turned out to have corgi poop in it, causing him to turn green with nausea.

6. The Minion that was picking up the corgi poop got his hazmat suit inflated by the leaf blower.