Brand of jams and jellies

It is unknown when Gru started to produce this line of jellies, but most likely he started producing it after a year of adopting Margo, Edith, and Agnes, as a way to support them.

Dr. Nefario's newest type of jelly under Mr. Gru's Old Fashioned Jelly is created from a combination of every known kind of fruit. However, due to its horrible taste, the jelly did not gain the approval of Gru, the Minions, or Dr. Nefario, and Dr. Nefario decided to leave to work for El Macho instead.

The line was shut down, but when Dr. Nefario returned to Gru's Lab, he used all the stock of Mr. Gru's Old Fashioned Jelly to combat the Evil Minions by mixing the jelly with the PX-49 and subsequently creating the Jelly Guns. 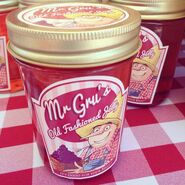 The sample of the jelly