Despicable Me Wiki
Register
Don't have an account?
Sign In
Advertisement
in: Minions, Minions Paradise Characters, Male Characters,
and 3 more

Phil is one of the Minions that appears in Despicable Me 2. He is voiced by Pierre Coffin.

Phil and Stuart are cleaning up from Agnes's birthday party when they spot Lucy kidnaping Gru, so they go after them. Then, Phil manages to get on the back of her car and he grabs Stuart by his tuffs, but when Lucy sees them she stops the car then knocks him and Stuart with her lipstick taser. While underwater, he and Stuart are scared by sharks as they are heading for the AVL submarine, he also laughs at Stuart when he had a starfish on his body. Soon, both him and Stuart make fun of Silas Ramsbottom's name as they both said "Bottom." Next, they watched the video of the PX-41. Also, he along with Stuart are spooked by a mutated rabbit that they both faint, as they head back while Gru is rowing the boat home. Phil was telling him to keep rowing.

Phil is later seen during Dr. Nefario's departure as he and Jerry were both seen crying.

During Gru and Lucy's wedding Phil (or Tom) was seen taking pictures of the married couple and their family and friends.

Phil appears in the mobile video game Minions Paradise as the main character. However, his appearance is very different, and the maid outfit becomes another character French Maid.

In the game, Phil also has several tasks for players to complete, and some of them can gain special collections for Phil, and the others appear often after each updates and can bring player prizes if they are completed. 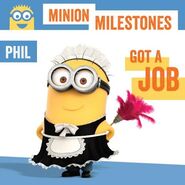 Phil as the maid minion.