Despicable Me Wiki
Register
Don't have an account?
Sign In
Advertisement
in: Animals, Antagonists, Male Characters,
and 3 more

Pollito is Eduardo Perez's pet chicken and the true secondary antagonist of Despicable Me 2.

According to Eduardo, Pollito is usually very friendly, but if he recognizes intruders he can be very offensive. After his first meeting with Gru and Lucy, he often attacked and glared at them.

Eduardo apparently kept Pollito ever since he was a chick, as shown in picture the restaurant owner keeps in the Salsa & Salsa kitchen.

After the rough night Pollito recognizes Gru when he is at the restaurant picking up Margo. Pollito immediately tries to attack, though Eduardo stops him. Instead of attacking, Pollito glares at Gru.

Pollito is seen again when she spots Lucy at Eduardo's party, but instead of attacking Lucy, he tries to get her purse. With help from Pollito, Eduardo finds out that Gru and Lucy work for the Anti-Villain League.

After defeating El Macho at the lair, Gru is trying to untie Lucy from El Macho's rocket, but Pollito presses the button that activates the rocket. This leads to Gru grumbling, "I really hate that chicken."

It is unknown what happens to Pollito after his master is arrested.

In Minion Rush, Pollito appears alongside El Macho in the boss battle in El Macho's Lair. The player's Minion must dodge El Macho's Evil Minions' cage, which he throws, and tap on Pollito to hurl them back at him. After hurling a couple of them back at him, or simply dodging, El Macho, along with Pollito will be defeated. 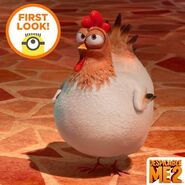