The Skater Minion Costume is a playable character in Minion Rush. It costs 50 costume cards and 1 coin to unlock or can be won in occasional bundle offers in the Shop.

The Skater Minion Costume wears a blue helmet with Gru's logo on it. It also has a blue skateboard with orange wheels. 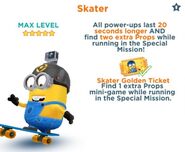