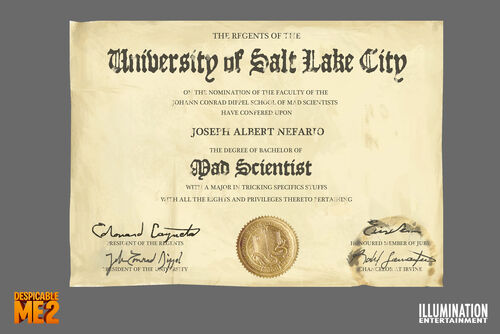 Where did you find that?!

Did you even click the link at the first post labeled as "Source"? (it started when I decided to snoop around Gullion's blog and found a bunch of links from other artists who had helped either in DM/Lorax/DM2. Some great stuff)
Another awesome thing found is a canonical concept art of Dave's Lucy fantasy, exactly the beach running scene, oh boy, it was Lucy in a swimsuit, sadly a one pieced one, but still a swimsuit, mang.

Due to this source you found and I've just saw, I think. I may agree of renaming this page. However, we have to put things in consideration first. I only suggest to ask more users to have an agreement on this so admins can make the decision about this properly with more opinions. Also, make sure the source isn't fictional or a misconception, otherwise we'll just have to put it on Minionpedia (just in case) for the meantime. THANK YOU! HAVE A VERY NICE DAY MY FELLOW MINIONS! From your friendly minion neighborhood!!!

"Quaternary antagonist turned main character?" Where did the editor who inserted that get it?

I agree with RRabbit42's essay on the subject of -agonist levels (I think it's on the Dreamworks wiki, but I'm not sure); anything below "deuteragonist" or "secondary antagonist" is almost certainly overthinking and excessive analysis. Does anyone who writes a story, or who reads/watches one and is not obsessed with character levels, ever think much beyond "these are the main characters, these are the opponents"? — evilquoll (talk) 17:56, September 9, 2018 (UTC)

Looks like that's been in there for about a year and I spotted similar descriptions on other pages. They really are useless descriptions that nobody uses in any other context. People don't talk about others they know as "my (former) quaternary rival turned primary friend". And as I said before, when you try to rigidly-define a character like this, there will always be someone else who changes it to a different rigid definition, which leads to edit wars. I will remove the useless descriptions from the pages. —RRabbit42 (leave a message) 18:24, September 9, 2018 (UTC)

Retrieved from "https://despicableme.fandom.com/wiki/Talk:Dr._Nefario?oldid=63837"
Community content is available under CC-BY-SA unless otherwise noted.