The Once-ler is a man who recounts to Ted Wiggins how his discovery of the Truffula Forest in his youth led to its depletion in the film The Lorax.

He left his family when he was a young man, setting out to find the perfect material with which he could make his invention, the Thneed, a product that could do any job. His family constantly ridiculed him, saying that if he were to return a failure, it would be no surprise to them but the Once-ler sets off anyway to prove them wrong.

On his journey, the Once-ler discovers a valley full of beautiful Truffula Trees, where the Swomee-Swans, Humming Fish, and Bar-ba-loots live. When he chops down a Truffula Tree, he gets a visit from The Lorax, a small, orange creature that tries to warn him of the recklessness of his decision. The Once-ler eventually agrees not to cut down anymore trees.

The Once-ler soon makes a profit by selling Thneeds and so he calls his whole family down to satisfy demand. At first, he has his family harvest the trees' tufts, but they convince him to resume logging as a more efficient method. Many Thneeds are sold and the Once-ler becomes filthy rich, corrupting him in the process. One day, however, the Lorax shows up just as the very last tree falls, putting the Once-ler out of business. His family leaves with his mother disowning him, telling him that he let her down, and that Bret is now her favorite child. The animals migrate and even the Once-ler's mule, Melvin, leaves him. He ends up spending the rest of his adulthood guilty, isolated and alone until the events of the film, where he has aged considerably.

One day, when Ted Wiggins is searching for a real tree to impress Audrey, his grandma tells him about the Once-ler and where he lives. The now elderly Once-ler recounts his story to Ted over the course of three days, giving Ted the last Truffula Tree seed when he is finished.

As Ted plants the seed in Thneedville, the old Once-ler takes his axe and hacks away at the wooden boards nailed across his window, gazing out at the town singing "Let it Grow". Some time later, when the trees have begun to grow back again, he emerges from his house to water the saplings. The Lorax returns, telling him that he did good and that he is proud of him. They enjoy a joyful reunion, after which the Lorax compliments the Once-ler's new mustache, stating "Nice mustache." 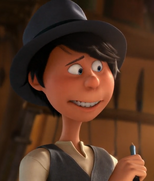 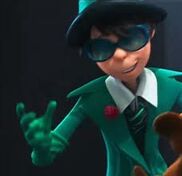 Once-Ler and Lorax hug
Add a photo to this gallery

Retrieved from "https://despicableme.fandom.com/wiki/The_Once-ler?oldid=78301"
Community content is available under CC-BY-SA unless otherwise noted.