The Worker Minion Costume is a playable character in Minion Rush. It costs 30 costume cards and 10 coins to unlock or can be bought in occasional bundle offers in the Shop.

The Worker Minion Costume has an orange hardhat with Gru's logo on it. It also has a black construction hammer. 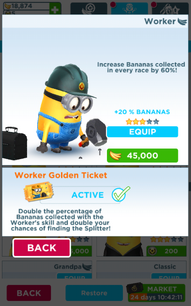